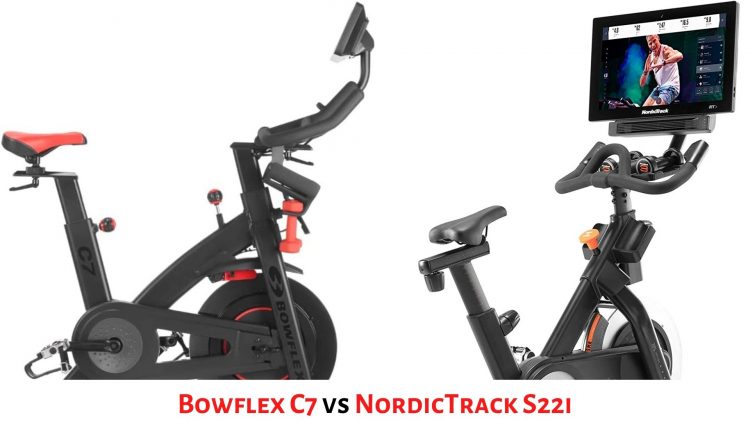 Finding the right exercise bike is tough, so we’re going to do the hard work for you and compare these two head-to-head to see who the winner is. Today our Bowflex C7 vs NordicTrack S22i review will see which of these is the true winner. Both have great options, but their prices are very different and we’ll have to see which gives the better value.

Our NordicTrack S22i vs Bowflex C7 review will check customer reviews, features, screens, connectivity, fitness tracking, and then any other differences we can find.

Read on to see which is right for you.

What is Bowflex C7?

If you’re looking for a fitness bike that offers a lot of value, then Bowflex C7 bike might be right for you. The price is entry-level for Bowflex bikes, but the features are top-tier compared to many other bikes in the same price range.

You get 100 levels of magnetic resistance, a 7-inch display, a tablet holder for using another device, a free JRNY membership for one year, numerous connectivity options, various fitness apps, and much more. These are many of the features you’d want to see with a premium fitness bike, but you’re getting them for much cheaper here.

What is NordicTrack S22i?

The NordicTrack Bike S22i gives you tons of features and it’s a commercial fitness bike that you can use in your own home. Not only that, but it has a very large dedicated display for watching your favorite movies, shows, or biking through exotic routes around the global.

This bike comes with a large 22-inch HD display along with a 30-day iFIT membership for live and on-demand workouts. You can add multiple users and there is an incline motor that ranges between -10% to 20% incline. There are 24 levels of resistance and Bluetooth connectivity.

All-in-all, a premium bike that has many amazing features.

What Others are Saying

Forming your own opinion is best, but if you’re like us, then you want to know what others are saying about these bikes. Customer reviews let you see how well the bikes function under everyday use.

The Bowflex bike Amazon reviews are fairly good. This model only has less than 130 reviews now, but that’s not necessarily a bad thing. It just means that some people aren’t seeing it on Amazon. The star rating is good at 4.2.

Most reviews talk about how well this bike performs, that it exceeded expectations considering the price, and that the features are simple to use. Many people also loved the dedicated screen because it let them exercise while being entertained.

The NordicTrack S22i Amazon reviews are as good as they get. This bike currently has over 3.7k reviews and a 4.3 rating. Most reviews describe the bike as one of the best, a true gym-level experience at home, and that all of the features are amazing. From the large screen to the incline, this bike lets you have fun while working up a sweat.

Let’s compare the features head to head here. In general, Bowflex is impressive for the price, but NordicTrack is much better and worth the extra cost.

Then there are the displays. We love Bowflex’s 7-inch display, but NordicTrack’s 22-inch display is larger and looks better. The NordicTrack bike display also tilts as needed. Another huge benefit is that the iFIT membership with NordicTrack connects directly to the bike and changes the resistance and incline to fit the routine. Both of these come with water bottle and dumbbell holders.

Both are good, that can’t be denied, but NordicTrack is much better.

Both of these offer a dedicated display, but there are pros and cons to both depending on how you want to use them. In general, the NordicTrack S22i display is far better, but the Bowflex bike display is a little better in some ways.

Let’s compare the screens themselves. Bowflex gives you a 7-inch display while NordicTrack has a 22-inch display. Not only is NordicTrack’s display larger, but the resolution is better as well. Another major benefit is that the display can be tilted and the graphics engine ensures that everything looks great from any angle.

Both of these connect to fitness apps. The major one they connect to for biking is JRNY for Bowflex and iFIT for NordicTrack. JRNY is free for one year while iFIT is only free for a month. However, many people say that iFIT is better because it gives more routes, more personalized instruction, and the app can change the bike’s incline and resistance for a dynamic workout.

What about media apps? Maybe you want to watch Hulu, Netflix, or some other media app. Bowflex is the big winner here. Their display comes with many apps and allows you to watch your favorite shows or movies.

NordicTrack allows this too, but it’s not as easy. You need to connect it to another device with an HDMI cable and stream the media to the display. It’s a lot of extra work that some may not find worth it.

In general, Bowflex is more versatile with media apps, but NordicTrack’s display is larger, has better resolution, works directly with the bike, and has many other benefits.

It’s a tie here as both of these bikes connect to various fitness apps and collect fitness data about you. This includes speed, time cycling, distance, calories burned, and so on. These are all the stats you would expect to get from modern fitness equipment.

The one thing we will say is that Bowflex is a little more versatile and connects to more apps. However, it’s easy enough to view the data on your phone with either bike, so it’s functionally a tie.

What is the Difference Between Bowflex C7 and NordicTrack S22i?

Curious about what is the difference between NordicTrack S22i and Bowflex C7? These two are similar in some ways, but then very different in others. They share many of the same features, but NordicTrack does them better from the larger screen to the incline and much more. See our other Bowflex bike reviews:

Both have displays, but NordicTrack is larger at 22 inches while Bowflex is 7 inches. However, Bowflex’s display is more versatile with media apps, but NordicTrack’s iFIT display connects to the bike and changes the incline and resistance.

Bowflex has more levels of resistance, but NordicTrack is equally challenging and includes incline settings. NordicTrack also connects to Bluetooth headphones so you can hear music and your instructor with ease.

Both of these are amazing, but who is the winner in our Bowflex C7 vs NordicTrack S22i review? NordicTrack S22i commercial is the better of the two, with the larger screen, more settings, and better workout features, it’s the clear winner.

However, we will say that Bowflex is a little more versatile and about half the price. If you want to save money while still getting a great fitness bike, then Bowflex is a great choice.