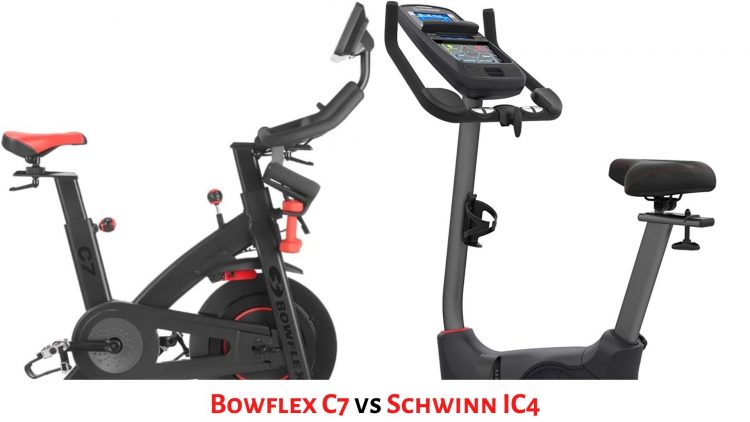 If you’re looking for exercise bikes that lean, then the Bowflex bike lineup is one of the most impressive out there. But, are these bikes really the best? Today our Bowflex C7 vs Schwinn IC4 review is going to compare these two similar home exercise bikes to see which is best for your fitness routine.

Our Schwinn IC4 vs Bowflex C7 review is going to focus on overall features, screen, connectivity, and fitness tracking metrics. We’re diving deep here to ensure you find the right bike for your needs.

We found that Bowflex bike C7 was better due to having better connectivity, more features, and being a leaning exercise bike, but read on to see which is right for you.

What is Bowflex C7?

The Bowflex bike series offers many different options with C7 being the entry-level offering. But don’t let “entry-level” fool you, this bike has all the features you would ever need while being at a comfortable price point. It comes with a 1-year JRNY membership and connects to many cycling apps, fitness apps, and streaming apps with the 7-inch screen.

Leaning is simple and gives you more resistance, plus there are 100 levels of magnetic resistance. You’ll feel comfortable the whole time with the race-style seat and cushioned handlebars. A JRNY membership also gives you access to over 50 routes around the world that you can enjoy.

What is Schwinn IC4?

The Schwinn exercise bike looks nearly identical to the Bowflex tilt bike, but there are some differences we will explore. The exercise bike by Schwinn gives you a 1-year JRNY membership for free to help you create adaptive workout routines, get personal coaching, and enjoy their many cycling routes. It connects directly to other cycling apps like Zwift or Peloton.

There are 100 levels of magnetic resistance that you can choose from. Simply turn the resistance knob to make cycling harder or easier. This bike has a backlit LCD console that shows your speed, heart rate, distance, calories burned, and more. It also comes with a tablet holder so that you can place your phone or tablet in front of you.

What Others are Saying

We think it’s best to form your own opinion about any exercise equipment, but hearing about customer reviews can be helpful. You’ll not only see how popular each bike is, but you can see what others are saying about them. Both of these have received positive feedback, but one has been more popular on Amazon.

The Bowflex Bike C7 Amazon reviews are good and show that many people enjoy this fitness bike that tilts. It currently has 123 reviews and an overall 4.2 star rating. That’s pretty good, especially with the fitness bike market being so competitive.

Most reviews centered around how solid the bike felt, that it was a quiet exercise bike, and that the connectivity was great. Some people criticized JRNY, but that’s more of a software issue than the bike itself. Others said the seat was uncomfortable, but this depended on the customer as some people loved it.

The Schwinn IC4 Amazon reviews are positively glowing. This product has 4,439 reviews and an overall 4.6 rating. Some people called it a “Peloton killer” while others focused on how simple the bike is to use. Many said it was right up there with Peloton and NordicTrack bikes.

While some were unhappy with the seat and that the bike didn’t come with its own tablet, most people truly loved this bike.

If we only look at the bike itself, then these two are very similar. In fact, telling them apart is tough if you don’t look at the brand name. They have the same overall design and many of the same features. That being said, we found that Bowflex C7 bike had a few features missing with the Schwinn IC4 bike.

Both of these come with 100 levels of magnetic resistance, water bottle holders, 3lb dumbbells for extra resistance, an adjustable seat, and a media rack for placing your phone or tablet.

One thing that Bowflex has that Schwinn lacks is the ability to tilt. Finding a leaning exercise bike at this price can be tough. Not only is that a premium feature, but Bowflex does a wonderful job of supporting you as you move left or right.

If not for that, then they’d be tied. This extra feature puts Bowflex firmly in the lead.

Both of these offer Bluetooth and WiFi connections that make it easier to track your health metrics. You’ll have no problem connecting a device to your bike so that you can track your progress. Once again though, one bike does this better than the other.

Schwinn offers Bluetooth and WiFi connectivity, but it only comes with an LCD screen that displays your heart rate, calories burned, and other info. It doesn’t have its own media screen. You have to use a tablet or phone to see cycling routes or to watch your favorite shows and movies.

Our Bowflex bike review found that the C7 IC bike comes with its own 7-inch display. You can use this in place of a tablet as it offers Hulu, Netflix, Disney+, JRNY, and much more. It’s like having a tablet bike combo. If you don’t like the display, then there is a media rack where you can place your own device.

If you already have a tablet, then these are quite similar, but we like how Bowflex gives you a dedicated display. Not only that, but Bowflex is a little more affordable, so having an extra like this was pleasant and unexpected.

Many people love tracking their fitness. Not only does this show how much you’re progressing, but it keeps a log of all the calories you burned and how much you did. Maybe you’re just curious about your stats or maybe you’re trying to compete. In either case, fitness tracking has become essential for fitness technology like exercise bikes.

We’ll say that it’s a tie here as both are basically the same. There is one small difference that makes Schwinn a little more convenient while you’re riding, but it’s not a huge difference.

Both of these bikes connect to Peloton, Zwift, and many other fitness apps. They also both track time, distance, speed, calories burned, heart rate, and more.

If you primarily check these stats when you’re done riding, then they are basically the same. If you like checking these stats while riding, then Schwinn is a little easier. Bowflex makes you select this view from the display, which requires you to focus on the display for a few seconds. Schwinn’s LCD display is under the media rack and simple to see. This is dedicated to your fitness stats, so it’s much easier to see.

While Schwinn is a tiny bit more convenient, this is mostly a tie.

What is the Difference Between Bowflex C7 and Schwinn IC4?

Curious about what is the difference between Schwinn IC4 and Bowflex C7? They look nearly identical and function almost the same as well. However, despite Bowflex having fewer customer reviews and being more affordable, we found that it was the better of the two. Check out our other Bowflex C7 reviews:

Our Schwinn IC4 review found that it functions very well as an exercise bike. It connects with Peloton, Zwift, and JRNY fitness apps, has an LCD screen for fitness stats, a media stand for your tablet, water bottle holders, 3lb dumbbells, and more. It’s everything you need for a home bike workout.

However, our Bowflex bike review found that it offers all of these same features, along with a few more thrown in. It has a dedicated 7-inch display with many media apps, and it can tilt. These are premium features, and we were surprised to see them on the less expensive of the two.

Those additions aside, these bikes are incredibly similar.

So, who is the winner in our Bowflex C7 vs Schwinn IC4 review? They are very similar, but we give the win to Bowflex bike. Not only is it a little more affordable, but it came with a dedicated display and can tilt. Schwinn lacks these. Both are great and you’ll be happy with either of them, but we think you’ll like Bowflex more.