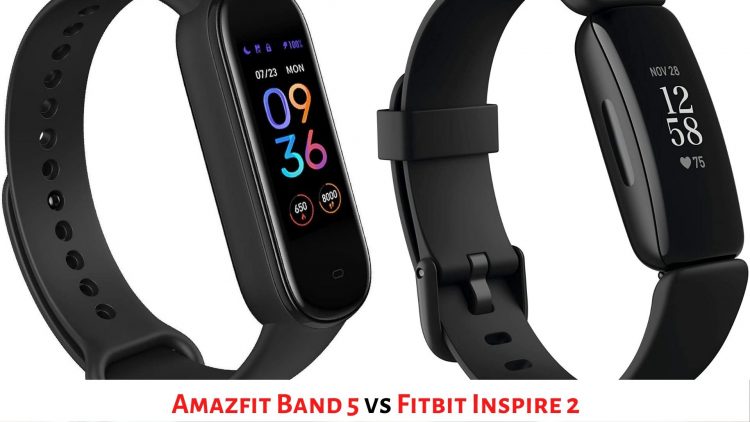 Fitbit is globally known as a top fitness tracker, but that doesn’t necessarily make it the best for everyone. Today our Amazfit Band 5 vs Fitbit Inspire 2 review will show you which of these is best. Amazfit has built a name for itself as a budget Fitbit, but let’s see which one truly gives you the best value.

Our Fitbit Inspire 2 vs Amazfit Band 5 review will focus on design, fitness tracking, wellness, smartwatch features, battery life, and any other differences we can find.

Read on to find out which fitness tracker is the smarter buy.

If you were to quickly glance at these two, then you might think they’re the same device. They both have a very similar design with a thin, rectangular screen and they are nearly the same size. They also both come with very similar silicone bands that are comfortable and fit easily on your wrist.

However, there are some major differences we found. Starting with the body, Fitbit Inspire 2 is slimmer and better designed while Amazfit feels a little chunky by comparison. It’s only by a little, and we definitely wouldn’t call Amazfit unappealing.

The display itself is also different. Inspire 2 is only a monochrome display. It does come with different clock faces (and you can change them with a paired phone), but all of them are black and white. Amazfit has a full color screen and the clock faces use different colors as well. They both look good though, so it depends on how much you like color.

The bands are both comfortable, but how they connect and the available bands differ wildly. Fitbit allows you to quickly remove the bands by pushing a little button on the back and there are hundreds of bands to choose from. Amazfit bands are fit over the tracker itself. There are fewer bands to choose from.

Inspire 2 is better overall in the design department, but the monochrome screen might turn some people off.

These activity trackers are made to monitor your heart rate, steps, and overall activity level. You want to pick the right sports or fitness mode to get the most accurate information about your performance. As such, you need to check to see how many sports modes are available.

There’s also the accuracy of the data. Amazfit is great for a budget device, but it’s still in the affordable category. The technology simply isn’t as accurate as what you’ll find in a premium model. While Inspire 2 is an entry-level device for Fitbit, it still carries the highly accurate Fitbit tech. This ensures that everything is accurate.

Unfortunately, neither has a built-in GPS. You need to connect them with your phone in order to get true distance tracking.

If you want the best data on your body and performance, then Fitbit is better. If you’re OK with basic data, then Amazfit’s price makes it the better choice.

In terms of wellness tracking, they are both similar on the outside. This refers to stress levels, sleep quality, and overall health tracking. While activity trackers are great for sports and burning calories, they also help with other aspects of health and wellness.

Both of these are able to track your health, gauge your stress, and score your sleep quality based on movement, heart rate, and many other factors. While the features are basically the same on paper, we would say that Fitbit seemed more accurate and nuanced. Amazfit was pretty good, but we felt more confident in the info we were getting from Fitbit.

Much like with the fitness tracking part, both are good, but Fitbit seems more accurate and fine tuned while Amazfit is on the basic side.

The line between fitness trackers and smartwatches is very thin right now. In general, smartwatch features refers to apps, notifications from your phone, smart assistant support, and music.

Both of these devices are able to connect to your phone so that text and call notifications can be sent to the tracker. You also get some limited controls for music (only when connected to your device). Amazfit surprisingly is better here because it also offers Alexa support. You can use this to control other devices in your home, which is amazing.

Neither is groundbreaking in terms of smartwatch features, but Amazfit Band 5 is better here as it provides a few extra features.

Judging the battery life on activity trackers can be tricky. Many give you an estimate based on the lowest possible use (like rarely turning on the screen and only sometimes going for a walk), and other times the battery life seems low only because power-heavy features are offered (like a built-in GPS).

These two are fairly similar because they don’t have any power-heavy features, so you should get lots of use from them. Inspire 2 offers a very good 10 days of battery life while Amazfit Band 5 offers an even better battery life with 15 days.

We would say that Fitbit’s estimate is about accurate. Some people even report getting closer to 11 days. Amazfit is also fairly accurate with most people getting around 13-15 days of use.

While your experience might differ depending on how you use the watch, both of these last over a week and rarely need to be charged.

What’s the Difference Between Amazfit Band 5 and Fitbit Inspire 2?

Curious about what’s the difference between Fitbit Inspire 2 and Amazfit Band 5? Both of them have good price tags. While Inspire is about twice as expensive as Amazfit, they are both so affordable that you can buy them without a noticeable dent in your wallet.

While they look very similar, Amazfit Band 5 and Fitbit Inspire 2 do have their differences. Fitbit has a more sophisticated build and significantly more bands to choose from. However, Amazfit has a color display and some people might prefer it over Inspire 2’s monochrome display.

They both offer fitness and wellness tracking. While Amazfit offers many features and tools here, it’s more on the basic side while Fitbit gives you accurate data and more of it. However, both of them have a great app that collects and displays this data for you.

Neither break new ground with their smartwatch features, but Amazfit surprisingly won this category because of Alexa support. That aside, they both pair with your phone for notifications and limited music control.

Battery life is better with Amazfit, but only by a little. Both are amazing in this regard, so we can’t say that there’s a big difference here.

So, which is better when Amazfit Band 5 v Fitbit Inspire 2? While Amazfit does offer some benefits such as Alexa support, a color display, and better battery life, Fitbit is the overall winner as it gives you more tracking metrics and better data.