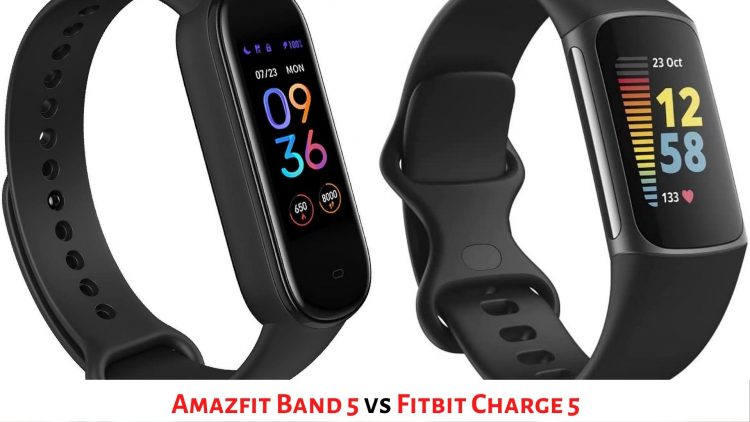 The world of wearable fitness trackers is always expanding and we’ve got two great offerings to compare today. One is fairly affordable while the other is a premium model, but does price make that big a difference? We’re comparing Amazfit Band 5 vs Fitbit Charge 5 to see which offers the most, and more importantly, which one gives you the better value.

Our Fitbit Charge 5 vs Amazfit Band 5 review will compare these based on design, tracking abilities, wellness tracking, smartwatch features, and battery life.

Read on to see which one is truly better for your wellness.

We’re surprised to say this, but the two look very similar when put side by side. They both have a slim design and longer screen that looks elegant. They also both have bright screens that make it very easy to see your heartbeat, oxygen levels, calories burned, and whatever else you’re tracking.

Fitbit Charge 5 is thinner and looks more sophisticated. However, Fitbit is about four times more expensive than Amazfit. That being said, Amazfit 5 actually looks quite good. If you’re going for style, then Fitbit wins, but Amazfit gives you a stylish fitness band without hurting your wallet.

Let’s also look at the bands. Both look quite similar and are comfortable on your wrist. Fitbit uses a quick-change mechanism that allows you to pop off the band and switch to a new one. Plus, there are hundreds of bands due to this brand’s popularity. While Amazfit lacks the same variety, you are able to slide off the current band for another color.

So, who wins this category in our Amazfit Band 5 versus Fitbit Charge 5? Amazfit gives you style at a budget while Fitbit is a clearly premium fitness device that looks beautiful.

These activity trackers are able to track your fitness metrics such as steps taken, heart rate, and they track your progress based on what activity you are doing. Simply set it to walking, running, strength training, or whatever else you’re doing and the band will keep track of your progress.

Much like the above section, our Fitbit Charge 5 versus Amazfit Band 5 review found that Fitbit does more, but Amazfit is quite good considering it’s smaller price.

Let’s start with sports modes. Amazfit offers 11 modes while Fitbit offers 20. While Amazfit covers most of the bases, you can be sure that whatever activity you’re doing will be offered on Fitbit. We also need to talk about the tracking technology itself.

Both of these track steps and heart beat. Amazfit does it quite well, but the technology is obviously not as sophisticated as Fitbit. The Charge 5 is so sensitive that it’s ECG sensor can sense atrial fibrillation, or an irregular heartbeat. The accelerator is also more accurate with counting steps.

There’s also the matter of GPS tracking. Amazfit 5 relies on your phone as a GPS while Fitbit 5 Charge has a built-in GPS. This gives you more freedom while Amazfit forces you to carry your phone around while walking or running.

Both are good, but Fitbit is the big winner here.

A fitness tracking needs to do more than just track how many steps you take or how hard your heart beats as you lift weights. Wellness tracking refers to tracking your sleep quality, breathing habits, relaxation techniques, and oxygen levels in your blood.

The good news is that both wearable trackers provide wellness tracking. Amazfit connects to Alexa and has many mindfulness and breathing practices you can engage in, but of course Fitbit is the superior one here with better metrics, more accurate tracking, and one of the most accurate heart rate monitors currently available.

That being said, they are similar on the most basic level. If you’re only looking for basic tracking, then both are good. If you’re looking for more advanced tracking and you really want the most accurate data on your body, then Charge 5 is the winner here.

This refers to music controls, apps, watch faces, and other fun smart features that are available on these devices. While Apple Watch is clearly the leader with smartwatches, both of these have good features.

They both offer music controls when paired with your phone (start and stop music), but Charge 5 offers more Spotify controls. They also both offer numerous watch faces so you can customize the color and style of your watch to fit your mood. You’ll also find that they each connect with your phone to provide you with messages and notifications, which is much easier than pulling your phone out.

One unique advantage of Amazfit 5 is that it offers Alexa support. Simply speak into the tracker and get your questions answered, turn on smart devices in your home, and more.

While Fitbit offers more and is more sophisticated, Amazfit isn’t that far behind. Plus, the Alexa support might be a driving force for some people.

On the surface, Amazfit 5 Band wins this category because it offers double the battery life, but let’s really look into this just to make sure that’s right.

While that’s double the battery power, let’s also remember that Fitbit has a build-in GPS and a much more accurate heart rate monitor. These take up more battery power, but you still have enough power to go your whole week without a single charge.

Though Amazfit wins this category, both are amazing and you should have no problem tracking your fitness without having to stop to charge your watch.

What is the Difference Between Amazfit Band 5 and Fitbit Charge 5?

Curious about what is the difference between Fitbit Charge 5 and Amazfit Band 5? We’re going to look at this right now. Both are actually very good trackers despite their significant price difference.

Though they share a similar design, Fitbit looks far more sophisticated. It has sleek rounded edges and a much thinner body. The bands feel better, easily come off, and there are hundreds of different bands to choose from. Amazfit looks good, though the body is bulkier, and it does have several different band colors to choose from.

In terms of fitness tracking, Fitbit 5 is one of the most accurate on the market now and it has many other activities that it can monitor. Amazfit covers the basics and is very good, but Fitbit is much better. The same goes for wellness tracking. However, we were surprised that Amazfit offered one feature that Fitbit Charge didn’t: Alexa support.

Battery life is great for both as well, but Amazfit provides nearly double the battery life. That being said, Charge 5 has a great battery life when you consider all of the features that it comes with like built-in GPS and extremely accurate trackers.

So, which is better: Amazfit Band 5 or Fitbit Charge 5? Both are good, which is surprising considering their price difference. While Amazfit has some features you won’t find in Fitbit, such as Alexa support, Fitbit offers far more and is the sophisticated choice here.

If price is your major concern, then Amazfit is the better of the two. If you want the best design and best features, then Fitbit is worth the extra money.