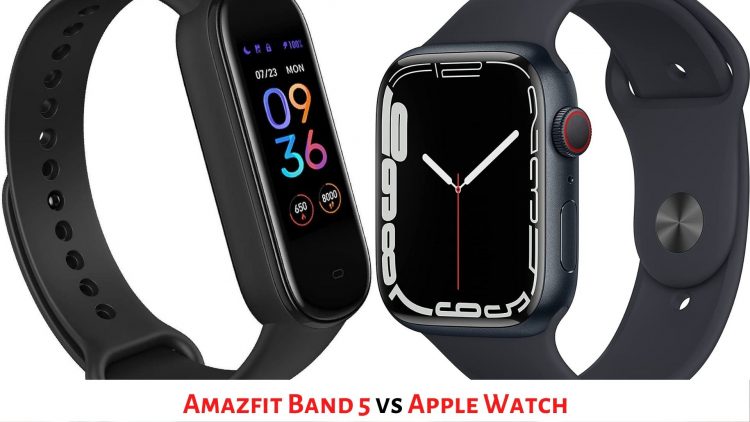 There are so many fitness trackers and smartwatches that it can be hard to choose the right one. Today we’re going to compare a cheap vs expensive smartwatch to see which is right for you. Our Amazfit Band 5 vs Apple Watch review will compare these two to show you which gives you the best value.

Our Apple Watch vs Amazfit Band 5 review will focus on design, fitness tracking, wellness tracking, smartwatch features, and battery life. There are many Apple Watch models currently available and we decided to focus on Series 7. While the earlier ones might lack some features, they are all premium devices.

Read on to see which one gives you the most value.

While a fitness tracker should be functional, it also must be stylish to go with your everyday look. No one wants to wear an ugly watch. While both look good, there’s one that’s much better than the other.

Apple Watch is considered the de facto smartwatch. Whether you’re thinking about style, functionality, or versatility, Apple Watch defines the standard. It has an iconic square design that looks sleek and stylish no matter what you’re wearing. You’ll also find that it’s instantly recognizable. People will immediately know what you’re wearing without asking.

It also has a tremendous number of interchangeable bands to pick from. You can choose other colors, materials, and sizes. This gives you infinite design possibilities.

Amazfit Band 5 looks good considering its price. While it doesn’t hold a candle to Apple Watch, it’s actually quite good when compared to entry-level Fitbits and other affordable fitness trackers. The rectangular screen shows you data quickly, and the full color display looks vibrant and pleasing to the eyes.

While it has a small number of bands by comparison, there are several colors that you can choose from.

The winner is Apple Watch. Not only does it look better, but it defines the standard of what a fitness tracker or smartwatch should look like.

Whether it’s just counting steps or giving you an accurate heart rate measurement, you want your fitness tracker to give you accurate data on your progress. Not only that, but you want enough sports modes to ensure that it’s correctly tracking your activity.

Both of these come with a similar number of sports modes. When it comes to Amazfit Band 5 versus Apple Watch, Amazfit clocks in at 11 modes while Apple has 16. Both of these cover all the basics (running, lifting, walking, hiking, and so on), but Apple has a few more modes to pick from.

However, Apple wins big here because it also has an “Other” mode. This is a highly customizable setting that you can choose from any other activity that you don’t see from the selection. This can be used to correctly track just about any activity. Amazfit doesn’t give you that.

Also, even though Apple Watch is more of a smartwatch that a fitness device, it gives you a wealth of data on your progress. You get way more data, and it’s way more accurate, than Amazfit.

If you want basic data that doesn’t cost much, then Amazfit is fine. If you want the most accurate data possible, then you need Apple Watch.

You’re more than just your steps, heart rate, and calories burned. You are a fully formed human, and that means that you have stress, you sleep, and you have other wellness needs that must be tracked and attended to.

Despite being a budget fitness tracker, Amazfit actually has a good number of features for your overall wellness. This can track your sleep and it gives you pretty accurate data on how well you slept. It also has modules for reducing your stress and helping you monitor your mental wellness.

Apple Watch provides similar features, but they go much deeper. You’ll have better sleep metrics, way more data about your mental health, and best of all, the app list is always growing. There are always new apps that you can download to make your device more useful. This ensures that you can customize the watch to monitor what you need it to.

Both are good, but there’s really no comparison here. Apple Watch gives you so much more, which is ideal for anyone who wants to better their wellness. At the same time, Amazfit does have great features when you consider its price.

While Amazfit has more features than we’d expect from a fitness tracker at its price, Apple Watch is a constantly growing ecosystem of apps and features that goes far beyond your expectations.

In terms of Apple Watch versus Amazfit Band 5, Amazfit is able to pair with your phone to show you message and call notifications. It also has Alexa support and can connect to your smart home devices. If you want GPS tracking, then it can pair with your phone’s GPS for better tracking. Another useful feature is that it has some camera controls when paired with your phone.

Apple Watch does so much that we can’t list it all here. Along with a massive number of apps, it also allows you to play music right from the watch (no paired device needed), comes with Siri voice assistant, has its own GPS and an optional cellular connection, and the paired options are far more robust. From more control and significantly more features, Apple Watch is ideal for those who want the most from their smartwatch.

One thing to note is that Amazfit works best with Android while Apple Watch needs an iPhone to unleash its full potential. They don’t work well with the other phone, so keep that in mind.

Once again, Apple Watch defies our expectations and does much more than Amazfit. At the same time, Amazfit is very good for the price and works better with Android phones.

A hallmark of fitness trackers is to have a very long battery life. Unlike all the other sections here, Amazfit is the big winner, but we’ll make sense of why Apple Watch is so far behind.

Amazfit’s battery life is an amazing 15 days. Even at its most strenuous use, you will easily get more than a week of use before having to charge. Apple Watch on the other hand is stated to last about 18 hours, but power users often find that it lasts closer to 12 hours. This should still get you through most of the day, and the quick charging feature ensure that it charges fast, but that still pales in comparison to Amazfit.

So why is there such a big difference? You have to remember that Amazfit isn’t packing nearly as much power. Apple Watch has many on-board features like its own GPS, music player, and numerous apps. Amazfit is relatively light by comparison. This means that it needs less power and thus has a longer battery life.

Amazfit is the big winner here, but it’s understandable why Apple falls short.

What’s the Difference Between Amazfit Band 5 and Apple Watch?

Curious about what’s the difference between Apple Watch and Amazfit Band 5? There are a massive number of differences we found since they are in very different classes. Amazfit is great for a budget device, but it’s still in the entry-level, affordable category. Apple Watch series 7 on the other hand is a premium device with powerful features.

In terms of design, Amazfit has a rectangular screen that is vibrant and full color, but it’s not nearly as clear or iconic as the Apple Watch design. Also, Apple Watch has a tremendous number of bands to choose from, but Amazfit has a few options you can pick. Apple Watch also has more clock faces to customize the look.

In terms of fitness tracking and wellness, Apple Watch gives you more modes, apps, and data. Plus, it’s more accurate. Amazfit gives you a lot for its price though, which makes it an attractive buy for those who want to save money.

While Amazfit is significantly better with battery life, you’re getting way more out of Apple Watch since it offers a massive number of apps and features.

So, which is better when it comes to Amazfit Band 5 v Apple Watch? While Amazfit is good for the price and has a good number of features, Apple Watch dominates the battlefield here. Amazfit has better battery life and a lower price, but Apple Watch is way more powerful and gives you a lot of features to explore.