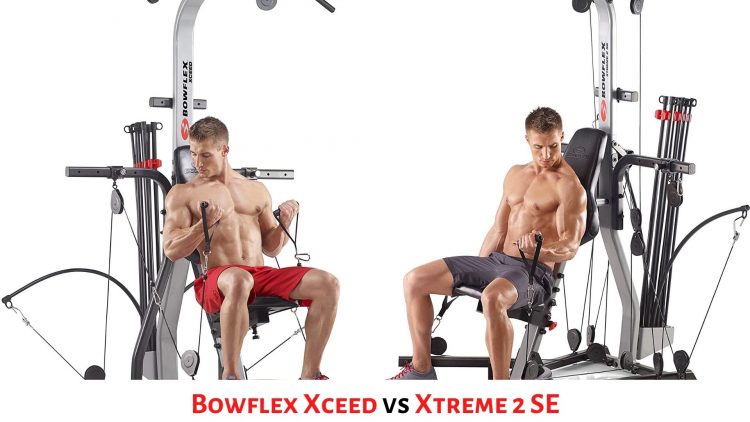 Home gyms give you the privacy you need to workout at home, plus it’s much more convenient than going out to a gym and waiting for people to stop using the machines you need. That being said, there are so many home gyms that choosing the right one can be tough. Our Bowflex Xceed vs Xtreme 2 SE review will compare these two to show you which is best.

Our Bowflex Xtreme 2 SE vs Bowflex Xceed review will focus on exercises, resistance levels, ease of use, storage, accessories, and any other differences we can find.

Read on and find out which Bowflex home gym is best for whole body fitness.

One reason why people end up going to gyms rather than using systems like these is because they don’t want to be limited in their exercises. Some cheap home gyms only offer a handful of movements, but it’s best to choose one that gives you dozens of different exercises.

These two both fit the bill, and they are nearly identical in that regard. While one is better, it’s only by a small margin.

In terms of Bowflex Xceed vs Bowflex Xtreme 2 SE, Xceed offers 65 exercises while Xtreme 2 offers 70. As we said, it’s not a huge difference.

Xtreme 2 offers a more advanced pulley system with more workout options, but the lower price and similar offerings from Xceed make it more attractive overall. While Xtreme wins, it’s functionally a tie between them.

Bowflex Power Rods give you even resistance whether you’re bicep curling, bench pressing, doing leg extensions, and more. Not only that, but the bars move smoothly. This ensures that you’re getting a great workout that really pushes your muscles to their limit.

Like many in the Bowflex lineup, both of these come with an initial 210lbs of resistance.

Not only that, but they can both be upgraded. You can choose either Bowflex 310lb Power Rods or Bowflex 410lb Power Rods. This means that the gym can grow with you as you get stronger.

They are both the same here, and upgrading the bars is simple.

Bowflex systems are generally easy to use, which is great because you want to exercise without fighting the gym. That being said, which one is easier to use?

Both of these include hand and ankle straps, and they both have a bar for lat pulldowns and squats. However, there is one distinct advantage Xtreme 2 SE has over Xceed. It’s the Quick Change System.

The Bowflex Quick Change System means that you can quickly transition from one strap or bar to another without changing cables. Unlike Xceed, where you’ll have to move the straps if you want to work another part of your body, this isn’t required with Xtreme. This allows you to exercise faster without any downtime.

This feature is amazing, especially if you’re doing whole body exercises and frequently moving from one muscle group to another. You won’t have to stop for a second. While Xceed is fairly easy to use, Xtreme 2 is much better.

Both of these gyms are the same in that they don’t store easily, which is a shame. Neither of them fold up. You only get that with PR1000 and Bowflex Blaze. While they can’t be shoved in a closet or under your bed, we will say that these systems are quite compact, especially when you consider everything you’re getting.

While it’s a tie and neither can be folded, most people will be able to fit this in a room or corner without any problems.

The best thing about accessories is that they let you do more workouts. For example, the angled lat pulldown bar is great for pulldowns, tricep pulldowns, and so much more. While you can always buy extra accessories to do even more, you want to make sure that you’re getting enough to get started.

Once again, both of these are roughly the same. They both come with straps for your ankles, handles for your hands, a squat bar, and a lat pulldown bar. That’s enough to do nearly every exercise you can think of.

What’s the Difference Between Bowflex Xceed and Xtreme 2 SE?

Curious about what’s the difference between Bowflex Xtreme 2 SE and Xceed? In many ways these are similar home gyms.

They offer nearly the same number of exercises (though Xtreme 2 has a few more), are both simple to use, have the same initial resistance along with expandable resistance, shouldn’t take up much room, and they have the same accessories.

However, there is one major difference. It’s the Quick Change System.

Only Xtreme 2 SE offers that. Xceed doesn’t have this option. This makes it much easier to switch from different bars, straps, and handles without having to move cables around. Just start lifting.

While changing a cable only takes a few seconds to a minute, this takes up so much time throughout your whole workout. If you love supersets or want to get your exercise in without any downtime, then Xtreme 2 SE is definitely the right one for you.

So, which is better between Bowflex Xceed or Xtreme 2 SE? Both are great, and they are extremely similar home gyms. The major difference is the Quick Change System. This is available with Xtreme 2 and that makes it the winner here.

However, if you want to save money while still getting premium features, and you don’t mind taking time to change cables, then Xceed is a great choice. It’s nearly identical outside of the Quick Change System.