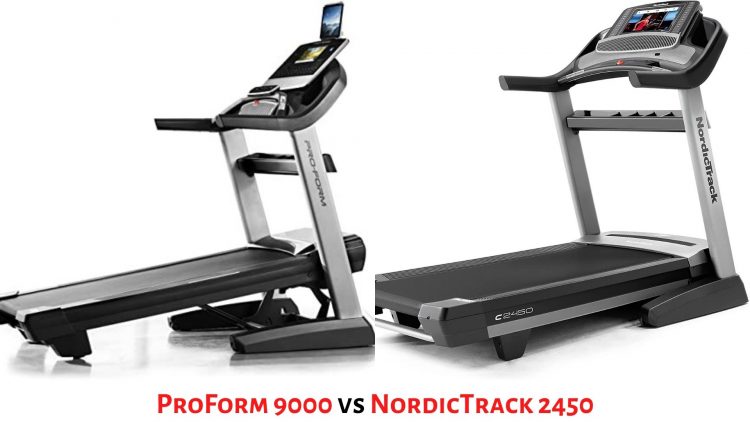 Looking for the best gym treadmill for your home? If you’re serious about your fitness and you need a treadmill that can keep up with you, then our ProForm 9000 vs NordicTrack 2450 review will show you exactly which treadmill is right for your fitness routine. Whether you’re training for a 5K, marathon, or just working up a good sweat, these can help you achieve your fitness goals.

Our NordicTrack 2450 vs ProForm 9000 review will compare these based on speed, incline, touchscreen, comfort, storage, and any other differences we can find.

Read on to get the best professional treadmill for your home.

The first thing you should consider, especially if you’re serious about running and making progress on your cardio, is the treadmill’s speed. Budget treadmills often lack in this department, but both of these have very good speed limits.

That’s not all. They both also offer one-touch speed controls that are super simple. You’ll love how easy this is, especially if you’re running at higher speeds. There are numbered numbers on the display. Just push the number and increase or decrease the speed as needed. They are simply labeled with a number to indicate how fast the setting is.

The only difference we found was that Nordictrack 2450 treadmill had these buttons vertically on the right while the ProForm 9000 treadmill had the numbers horizontally along the bottom. Both are easy to use, so it comes down to a matter of preference with this.

Another unique feature is that both commercial treadmills connect to iFit. The trainers there can increase or decrease your speed as you go through the fitness program.

In general, both have the same speed and offer easy ways to adjust the speed.

If you want to really burn calories, then you need to get a treadmill with incline and decline. Changing the angle not only works different muscles, but it also makes the run so much harder. While many treadmills have incline, you need to pay attention to how much of an incline you get and how easy it is to activate.

Switching between the angle is also the same. There are buttons (vertical on NordicTrack and horizontal on ProForm) that correspond to the incline. Much like with speed, each number is clearly labeled with a number.

Also, much like with speed, iFit trainers can change your incline to make your routine harder or easier. This adds a whole new level to your workouts.

Though some people might have a preference for the button configuration, they are basically the same in this regard.

Now we start seeing some differences. Both of these feature vibrant touchscreens that allow access iFit content as you run. These programs don’t just keep you motivated. They also change the speed and incline to make your workout even tougher.

The major difference is the size of the touchscreens. ProForm has a 10-inch display while NordicTrack offers a 14-inch display. Not only that, but the NordicTrack 2450 display has better resolution, was brighter, and was a little more responsive to touch.

Both are great and access the same content, but would you rather have ProForm 9000 or NordicTrack 2450? We have to go with NordicTrack here.

We’ve been talking a lot about making your workouts harder so you sweat more and lose more weight, but the truth is that you also want the run to be comfortable. Treadmills are supposed to be soft on your joints so that you can run further without hurting yourself.

Both of these are comfortable, but one is somewhat better than the other. However, we can say that they are the same when it comes to weight limit. They both support up to 300lbs.

ProForm comes with patented ProShox cushioning. This protects your back and joints while improving your recovery and making your run feel great. It will soften the impact even when you’re doing long cardio sessions.

NordicTrack 2450 Commercial fires back with Runners Flex cushioning. While this does all the same things on paper (softens the impact, protects your joints, etc), we found that it felt far more comfortable, especially after long runs. You’ll find that your recovery is even better with this treadmill.

They are similar, but something about NordicTrack felt so much better.

You’re all done for the day and you don’t need the treadmill anymore. Some treadmills just stay where they are, which might be fine if you have a whole room for them, but it’s often better if it can fold up and store away.

The good news is that both of these treadmills can fold and store with ease. Not only that, but they securely lock so that you don’t have to worry about the tread falling down.

We can’t pinpoint any significant differences between them in this regard. They are both very easy to fold, and they only take a few seconds to pull back out and fold down for your exercise.

What’s the Difference Between ProForm 9000 and NordicTrack 2450?

Curious about what’s the difference between NordicTrack 2450 and ProForm 9000? We found that these are both premium treadmills that give you the gym experience from home. They have many similarities, but there were a few differences we found.

Both of them offer the same speed and incline settings, and they are changed nearly the same way. They also both fold up for easy storage. While they both offer a touchscreen, the NordicTrack one was larger and looked better. NordicTrack was also more comfortable, though ProForm felt very good as well.

They also both connect to iFit, which gives you fun workout routines and the trainers can change the speed and incline to improve your workout.

While they are similar, we have to say that NordicTrack 2450 was the better of the two, though ProForm was nearly identical.

So, who wins in our NordicTrack 2450 vs ProForm 9000 treadmill review? We found that both are amazing and they are very similar, but the features on NordicTrack are just a little better. It’s the winner here because you get all the same things, just better. While ProForm is a little more affordable, we think you get more value from NordicTrack.